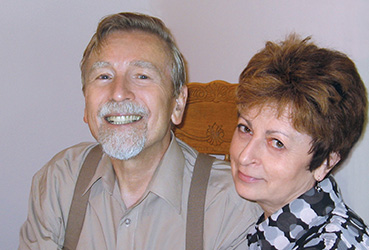 There is nothing easier to write your biography, which becomes an "Autobiography", because you write it yourself. Much more interesting and even more fascinating, when your days to examines by a beloved woman - the wife with whom you lived for thirty-five years! It occurred to me to ask of Zina Yurganov to tell about me everything she thinks fit, relying on her own memory, up to the days of today. My wife agreed and this is what came of it...

...In front of me stood a stocky man with a pale complexion. I’m known that he had lost his beloved wife, and he must raise three boys, very young. My first feeling for him was compassion and deep respect for what this man was doing: books, journalism, television and radio programs, lectures.

On the shelf in the library where I worked, there were his several books: "Look as in a mirror, into another person", "The beauty of communication", "Self-portrait of love without retouch." These were books on social psychology, and "The Beauty of Communication" was addressed to adolescents. I knew him as the author and host of the TV programs "Accents", "truth ", as well as radio broadcasts: "There are no desperate situations", "Good word, advice, consolation." Even the title of his programs and books convinced that this person, whom everyone in Minsk knew as Oleg Yurganov, kind, intelligent and responsive.

At the first moment of my communication with him, I could not imagine that he could pay attention to me and even become my husband. The age difference between us is eleven years old. His appearance is pleasant, but he slightly is lame. As I later learned, is the result of old disease, which caught up with Oleg in early childhood.

We did meet not more than half to two weeks, but almost every day. Suddenly he made me an offer I agreed and we live together for thirty-five years! Every day I fall in love with him more and more. Oleg - a man with own view of view on everything: politics, art: visual, musical, artistic, theatrical ... History, psychology, sociology - an object of his profound scientific interests.

Being an invalid of childhood, he constantly and stubbornly struggled with the disease for destiny and life. I remember his story about how, after a complicated surgical operation, he had to learn how to walk for several months, to sit for a long time, since he had to start studying at Saratov University. To Rise on the stairs, sit on lectures in classrooms, in libraries. After completing his studies, Oleg defended his Diploma, in which the scientific interest in psychology was associated with his philological education. The theme of his Diploma was: "The psychology of drama, for as work of art». Having received the Diploma about the termination of the Saratov University in 1967, Oleg has started work in the Defense companies embodying in practice of labor collectives the knowledge of industrial and general psychology.

In 1961, he married Elena Kozlovskaya. Began to work as the head of the Komsomol’s organization of the factory of artificial fibers in Engels, and was then invited to the Obkom Komsomol, where he worked for almost five years. His attention to sociology and social psychology began to develop actively in parallel with the growing interest i to these scientific disciplines in USSR. Arrive in Minsk in 1970; Oleg Yurganov worked energetically in television and radio journalism for twenty years. At the same time in 1972 year Oleg began at the Belarusian Academy of Sciences (in the Institute of Philosophy and Law), in the Sociology's sector. Oleg's life in the republic was full of creative tension, new discoveries and, unfortunately, irreparable losses. He divorced his first wife and married Tatyana Tuzova, a student of journalism the Belarusian University. She gave birth to three boys, but her Successful scientific career was interrupted. In young age - she died suddenly. This was for him a heavy blow...

In end of the autumn of 198I I met Oleg and we started our life together full of worries, new mutual discoveries, vigorous overcoming of inevitable life problems, right up to the collapse of the USSR in 1991 and departure to immigration - to the USA...

Life in Minsk has been in our ten years - from 1981 to 1992. In those years I adopted his children Igor and Yaroslav, and gave birth to two boys: Boris and Dmitri. All these years, Oleg was actively engaged in sociological research, wrote books, spent many hours of Business games on courses to improve the skills of workers of industry and organizations, lectured in Minsk universities on sociology, social psychology, and took part in the political life of the republic. During the liberalization of the economy, Oleg opened his company "CROSS" [consultation, development, experience, reference service]. For the first time he used the method of preparing political leaders, the system of "public relations" in the form in which he understood it in the conditions of modernization of Soviet society in the practice of pre-election campaigns.

At the same time, Oleg was sensitive to the problems of the younger generation. In 1985 he opened the "Dialogue" studio, where young people learned the art of communication, the skills of public speaking, the culture of external design in various activities. A similar theme was presented to them in a special course: "Culture of Teacher's Behavior" at the Institute of Foreign Languages ​​in Minsk. By combining his knowledge of general and social psychology, in five years, up to 1991, Oleg prepared two hundred and fifty students in the "Dialogue" studio...

Immigration to the United States, which began in 1992, proved to be a difficult school for us. However, to the best of his ability, Oleg participates in the life of the Russian-speaking community of Baltimore, where we settled after our arrival in the United States. His knowledge and creative skills were very useful here. Oleg participates in the work of the Russian-language newspaper "CASCADE", as an actively writing journalist. He leads in the newspaper special "Hotline". To him go all the information about the problems of Russian-speaking immigrants. Oleg was known to all the readers of the newspaper "Cascade". At the same time, he is preparing for scientific work at the Department of Sociology at the Johns Hopkins University. He begins to work out the problem: "Social adaptation of Russian-speaking Jewish emigration to the United States, which came from the former USSR." Simultaneously, Oleg meets the postgraduate student of this University - Michele Stem Cook, advising on her doctoral dissertation: "Inheritance and disinheritance of the memory within the Families of the Jewish from the former Soviet Union". For about five years this work continued, which culminated in the successful defense of the thesis and the receipt of Michele Stem Kook of the scientific title of Doctor of Sociology in 2002.

Infinite burdens undermined Oleg's health and he had to limit himself to journalistic and writing creativity. With the development of the Internet, Oleg opens an electronic magazine: "Russian Baltimore", in which he publishes his journalistic articles, works of local community writers. He begins to restore the manuscript of Tatiana's deceased wife and in 2006 finishes her book: "Self-portrait of love without retouch." We leave for Minsk where Tanya's book was published and was a great success. After returning to the United States, Oleg wrote a wonderful children's story: "The Dreams of Uncle Al", dedicating it to me, for which I am infinitely grateful to him! The book is full of kindness, a cordial attitude towards people, it teaches tenderness and a careful love for nature. Illustrations to the book were made, as in the previous Tatyana's book , a wonderful artist from the city of Vladimir - Tatyana Solodilova.

In 2013, Oleg proceeds to the main book of his life: "At the crossroads of fate." This is a huge saga about Oleg's life, about the country, in which he was born, studied and lived, about of the forefathers and his life in the US. This documentary novel consists of three books: "The Relatives and the Time"; "White and black"; "Person of the Year". Two of these books, including the novel "Self-portrait of love without retouch", have already been published and the guests of the site can here familiarize themselves with their content. The third book is in the work today. I think that in two years this work will be completed...